The game begins with an empty board. After each tap a random number is generated between 1 to 90 .Find the random number in your ticket and mark/ dab all the numbers found in the ticket as called by the dealer.The game ends when all 90 numbers are drawn, or when a winner is declared for all the patterns of the game, whichever comes first.

In order to win in Tambola or Bingo, you need to match winning combinations. Some of the popular winning combinations in a Tambola game are:
Early Five : The ticket with first five number dabbed.
Breakfast:Player whose first three column are checked fastest
Lunch 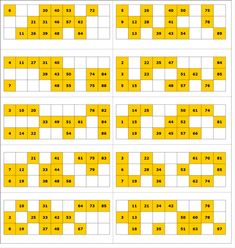